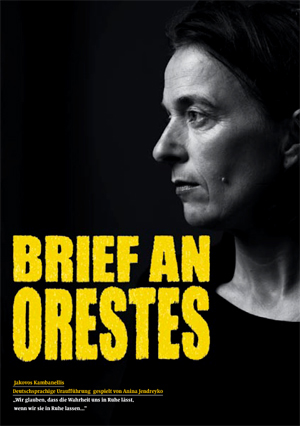 The monologue “Letter to Orestes” was written by Iakovos Kambanellis, probably the most important Greek dramatist of the last fifty years; it is played by the actress Anina Jendreyko and gives one of the most despised women in antiquity the chance to speak. The one-woman piece “Letter to Orestes” revisits the subjects of the Oresteia, the Ancient Greek tragedy by the poet Aeschylus, and describes the course of events as perceived by Clytemnestra, who eventually murdered her husband Agamemnon.
We encounter this woman of mythological origins, but at the same time a tragic, vital woman of today who accepts responsibility for the more dubious sides of her life as well. A monologue which is classically directed against any inclination to concealment.

In the monologue “Letter to Orestes” Clytemnestra, one of the most famous female murderers of Greek antiquity, is given a voice for the first time. When Agamemnon returns from the Trojan War after ten years, she kills him. Then she fears the revenge of her children Electra and Orestes.Clytemnestra knows that a violent end is approaching her. It is not the fear of being murdered, nor an attempt to defend her own actions, which move her to write to her son. She finds the courage to tell Orestes about her own life and the reasons behind what she did. She does so because not to talk of it would mean she was ” bequeathing him a silence in which is concealed all calamity.”  She tells of her life; of the oppression and violence she has been subjected to; of the sacrifice of her second daughter Iphigenia and of how brutally Orestes was sired. She portrays Agamemnon as a choleric husband, an unloving father and an autocratic warlord. She tells of her self-contempt, but also of love and how she found it. She struggles for honesty because she has understood that self-respect is only possible through honesty.

The author Iakovos Kambanellis (born 1922 – died 2011) was the most important dramatist in modern Greece. After returning to Greece in 1945, following two and a half years of incarceration in the Mauthausen concentration camp, he discovered his passion for theatre. In 1957, I.K. laid the foundation stone for a new beginning in Greek theatre with the première of his play “The Backyard of Miracles”. He influenced entire generations of dramatists with this play. Over the last fifty years he wrote more than 30 pieces for theatre and film which were crowned with success. Many of his songs were set to music (Miki Theodorakis), and his plays and book (Mauthausen) have been translated into over ten languages.

“I don’t know if I would be the person I am now, if I had not had this inestimable experience in hell… the motivating force for me to write was my connection to Mauthausen – without Mauthausen I could never have discovered the power of theatre. Theatre revealed me and I discovered it.”

Translated from the Greek by Dimitris Depountis

“Jendreyko dispenses with dramatic gestures; her Clytemnestra is an uncompromising woman who requires no desperation to reveal the truth, but rather courage and a quite shocking sense of reality. The director encourages the dramaturgical tendency towards introspection and demands neither impressive gestures nor explosive temperament – what we experience is not the process of passion but its fruit – the truth: “It took a long time till I realised how totally wrong it was to conceal the truth. (…) We imagine that the truth will leave us in peace if we leave the truth in peace.’ The same holds for the depiction of this process – this short, concentrated evening of theatre did not leave us in peace for one second.”

…The audience is Orestes, so to speak. We were Orestes. Jendreyko’s portrayals are so convincing, she acts in such a personal and direct manner that it feels as though she were someone close sharing her most intimate thoughts with us.

Absolutely no distance is generated by the apparently divisive centuries. Jendreyko’s Clytemnestra is a child of her era of course, but with her honesty, her struggle for self-respect and the efforts of a mature woman to make sense of the course of her life as she looks back on it, there is nothing which divides her from a woman of today. She takes responsibility for her life and stands up for what she believes in